The Man in the High Castle: Gripping, timely Amazon alternate-history series is a stark reminder of what happens when fascism prevails

Contemplating such situations is tempting, but sadly there aren’t means to experience life in those parallel worlds that must surely be lurking just beyond the perception. Also, while these situations are important, they are but insignificant what-ifs as compared to the hypothetical Axis victory in World War II.

Those who have read enough of what occurred in World War II know how close Germany and Japan came to subjugating Eurasia. So many things could have gone catastrophically wrong. The United States might not have intervened. Colonial soldiers enlisted in the British Army might have refused to fight. And so on. So how the world might have looked like had the Axis powers won? Enter The Man in the High Castle.

Based (loosely, Wikipedia says) on Philip M. Dick’s 1962 novel, this Amazon series explores probably the most important what if one can imagine. I am sure we all are sick of American hawkish foreign policy and imperialistic tendencies, not to mention its Big Brotherly deep state. But we should still be grateful that it was Uncle Sam and its allies who won the war. The current reality is far lesser of the two evils.

In The Man in the High Castle, the Axis powers won the World War II. The United States was carved up between the Nazis and Imperial Japanese into two parts that are called Greater Nazi Reich and the Japanese Pacific States respectively. There is a thin strip between the two regions that is lawless and called the Neutral Zone. The year is 1962. Although Japan and Germany were allies in the war, there is a tension between the two, not too different from the Cold War tensions that dominated the political landscape during the latter half of last century. To end the war, Germany had decimated the American capital Washington DC including Pentagon. Even though it is alternate history, The Man in the High Castle is not escapist, and the world is so well-realised that it is perturbing. Nothing seems fantastical, all thanks to top-notch world building and production values. And also the fact breathing down your neck that what we are witnessing what nearly happened.

Both the Nazis and the Japanese are not surprisingly totalitarian regimes and unflinching in their suppression of dissent. Small acts of resistance prompt utter destruction of not only the perpetrators but also their families and even friends. Both the regimes are looking for a mysterious man who few have seen. He calls himself The Man in the High Castle. This man might hold the thread to the last of the resistance in America.

More mysterious than the man himself, however, are the films he either propagates or collects or maybe both. Those films show different realities. The what-ifs I was talking about. The Führer himself is interested in these films. One of those show Allied powers winning the war and the United States dropping atomic bombs on Japanese cities of Nagasaki and Hiroshima.

Juliana Crain (Alexa Davalos) is a woman who has made peace with the life under Japanese occupied San Francisco. She gets entangled with the resistance and the films, thanks to her sister and becomes wanted by the Imperial authorities. Her boyfriend does not want anything to do with the resistance and tries to discourage her, but gets involved himself when he becomes the topmost target of Kempeitai — the Imperial Japanese police. 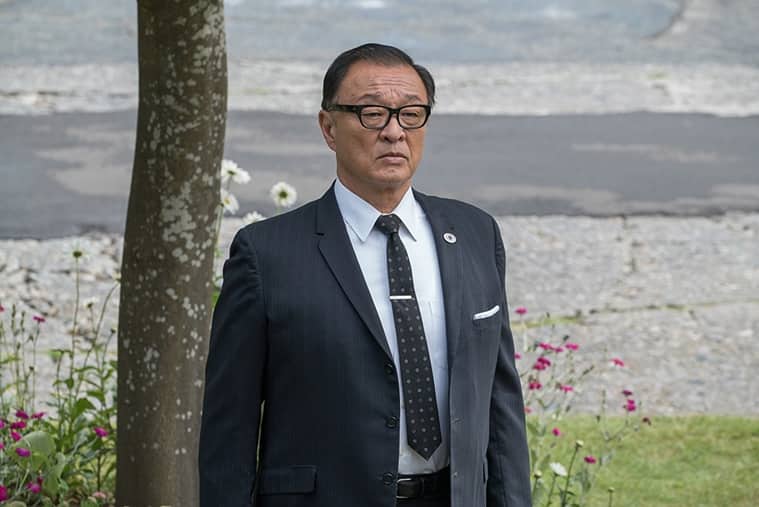 Then there is Japanese Trade Minister Nobusuke Tagomi, played by Cary-Hiroyuki Tagawa. He is one of the few morally upright men in Japanese high command. “Perhaps too good for this world,” as his assistant tells him. He wants to live in a better world and is unusually kind to those beneath him. He concocts a conspiracy with the help of a Nazi official having a similar line of thinking to stop the hostilities between Japan and Germany using the doctrine of Mutually Assured Destruction. The performance by the venerable Tagawa is brilliant — measured, thoughtful, and wise.

British actor Rufus Sewell plays Obergruppenführer (try saying that thrice continuously) John Smith who is a loyal Nazi – the highest ranking German official in America. He is utterly ruthless, not only towards subversive elements but also to his political opponents. But he is also fiercely dedicated to his family, a loving husband and father — the quality that humanises him. As far as villains go, John Smith is pretty compelling and you might finds yourself rooting for him at times even though he is a Nazi through and through.

The Man in the High Castle is is unlike anything you have seen and assumes even more relevance in this era of militant nationalism and authoritarianism. Of course, there are many good alternate history television shows and movies, but none as well-done as The Man in the High Castle. It is not only high quality television but also a timely reminder of how the world would look like if we let fascism win.

Under the Radar is a weekly series that talks about one great movie or TV series that for some reason slipped most people’s attention — flew under the radar, so to speak — and is certainly worth checking out.

Justin Bieber to return to India after 5 years, will perform in New Delhi on this date