The letter said that the studio appreciates Karni Sena’s efforts in alerting it to their grievances regarding the film. The studio further gave its assurance that it never intended for anyone’s sentiments to be hurt or disrespect the titular Rajput ruler.

“In fact, we wish to celebrate his bravery, achievements and contributions to our nation’s history, through this film.

“As per the multiple rounds of discussions between us, and to peacefully and amicably resolve the raised grievance, we will change the title to “Samrat Prithviraj.” We are highly appreciative of the mutual agreement reached between us that you have no further objections with regards to our Film and that all other points raised by you earlier are no longer a point of contention between us. We thank Shri Rashtriya Rajput Kami Semi and its members for understanding our good intentions pertaining to the depiction of the great warrior in the film,” said the letter. 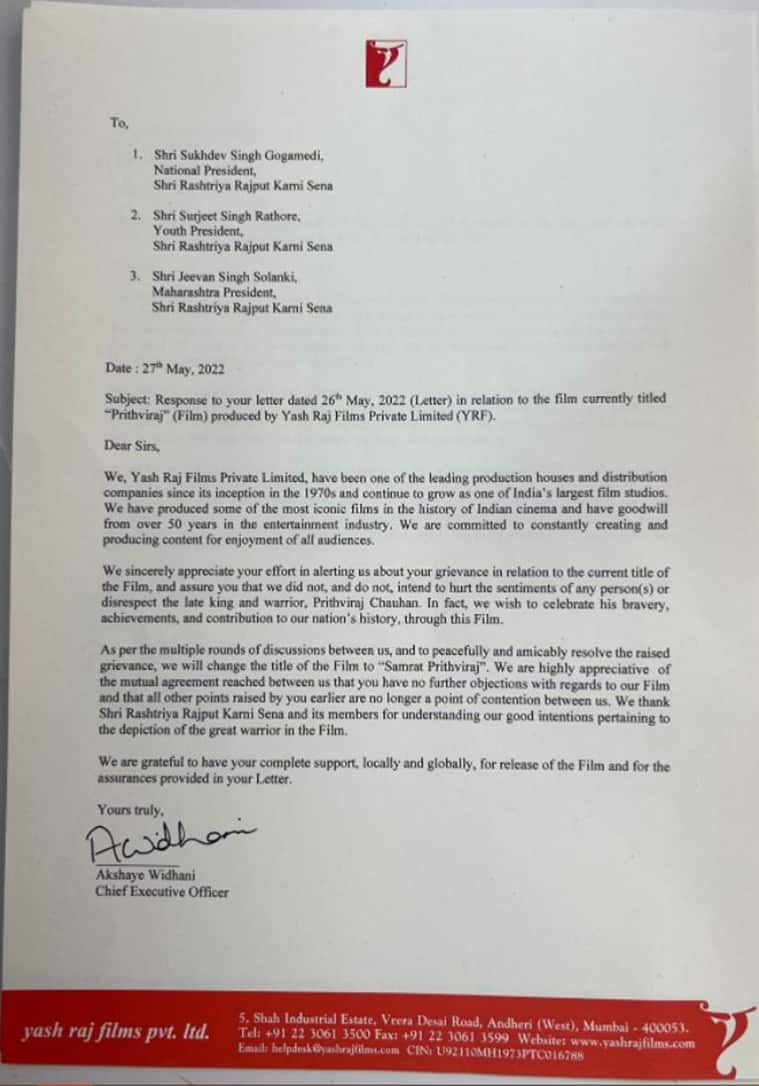 The letter said that Yash Raj Films appreciates Karni Sena’s efforts in alerting it to their grievances regarding Samrat Prithviraj.

Samrat Prithviraj is written and directed by Chandraprakash Dwivedi. The film’s plot is based on the medieval epic poem called Prithviraj Raso penned by the emperor’s court poet Chand Bardai.

Dwivedi had earlier said that Prithviraj has been a long time coming, and that he lived with the story for 18 years before he made the movie.

“Prithviraj is my dream project. It’s a script that I have nurtured for a long, long time because of the extensive research work that was needed before I even attempted to make a film on this mighty and legendary king. To be precise, Prithviraj’s final research took about six months for me to be fully satisfied that every single fact was checked multiple times,” said Dwivedi.