A millennial watches Anil Kapoor-Tabu’s Virasat: A cinematic experience that deserves revisiting even after 25 years

They are cut from the same cloth but driven by their own ideologies. One comes from the educated strata and has plans for his personal growth. Other is a messiah to the oppressed and prioritises villagers’ comfort over his own. They are both well-aware, but what sets them apart are their motives in life and their love for their ancestral land.

Amrish Puri’s Raja Thakur, and Anil Kapoor’s Shakti Thakur, give an edge to Priyadarshan’s 1997 film Virasat, which could have been a regular addition to Bollywood’s favourite siblings’ rivalry trope. I remember ignoring the film every time it played either on ZEE Cinema or Sony Max, simply because it was an older film and I preferred watching something newer. But now as I watched the film for the first time after 25 years of its release, I watched content that remained fresh despite passage of over two and a half decades. And, I guess that is what crisp writing and great actors do to you.

Virasat is a remake of the National Award-winning Tamil film, Thevar Magan. Anil Kapoor and his brother Boney Kapoor decided to remake the Hindi version, with the original screenplay that Kamal Haasan wrote in just seven days. When Kapoors were building the team, they approached veteran star Raaj Kumar for Raja Thakur’s role. In an interview with Mumbai Mirror, Anil revealed being warned, “any director who suggested changes (to the script) should be shown the door” by Kumar. And, thank God for Kumar’s conviction in the script, else the film would not have been a classic like it is now. It has aged like fine wine.

The actor commemorated 25 years of the film and tweeted on Monday, “Dedicating the 25th Year of my personal favourite film Virasat to one of the the best producers I have ever worked with! #MushirRiaz.” Virasat tells the story of a long, bitter enmity between Thakur brothers – Raja and Birju (Govind Namdeo) – which has split the village into two groups. Raja Thakur’s son Shakti returns from London after his studies and wants to start a chain of restaurants instead of staying back in the village. But fate has other plans for him.

In the opening scene itself, Haasan has established a father’s love for his son and the villagers’ adulation for the Thakur scion. Shakti gets a grand welcome back with everyone dancing and singing “Apna Kunvar Aayaa, Rajeshvar Aayaa, Sang Apane, Vo Rang Kitane Laayaa Hai…Dhol Bajne Lagaa Gaanv Sajane Lagaa..” However, amid the festivities, it is well-established, that too without any dialogue, how Shakti’s girlfriend Anita (Pooja Batra), who has accompanied him from London, is disapproved of by Raja Thakur. Not just this, there are more moments in the film that speak a lot without words.

For instance, after a massive man-made flood in the village, Anil Kapoor steps into the murk barefoot to help villagers. The scene is the beginning of his metamorphosis into his father and him discovering his roots. Similarly, Raja Thakur never expresses his love for Shakti but looks at him discreetly while he walks away after a fight between them. It speaks volumes about his love for him. In one instance, he also gestures at munimji to cancel Shakti’s ticket behind his back. 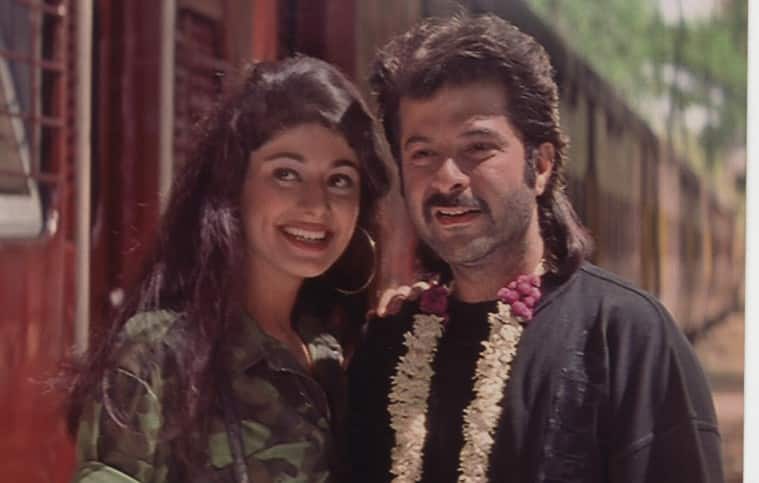 Haasan has also cleverly interwoven into the script the plight of the poor villagers who suffer due to the leaders and their animosity, yet are willing to die and go to jail for them. Farmers complain to Raja Thakur about the fence that Birju Thakur has put on his side of the village which makes their route to the market longer thus spoiling their produce before it reaches the market. Another villager is unable to sell his land as it is held as a mortgage by Birju Thakur despite it being his source of dowry for his daughter’s marriage. But all of them are still ready to pick up a sword at their leader’s command. Through these scenes, Haasan has showcased the raw face of poverty in the villages and the blind faith of the downtrodden in their leaders. In some cases by choice and in some, by lack of it.

However, in the climax, through Shakti’s loud appeal to his folks to go and fend for their farms and educate their children, the makers try to send a message of not taking the law into one’s hands for misplaced honour and false pride.

Any discussion around Virasat will be incomplete without a discussion about the brilliance of its cast and a splendid soundtrack. Commendable performances by Amrish Puri, Anil Kapoor, Tabu and Govind Namdeo, coupled with music prowess of Javed Akhtar’s heartwarming lyrics, Kumar Sanu’s soulful voice, and Anu Malik and S. P. Venkatesh’s melodious tunes, Virasat is a perfect cinematic experience.

Kapoor transforms into Raja Thakur after his father’s sudden demise quite well. He aces the mannerisms of a village leader and that of a foreign return. Kapoor had earlier said that playing the part was physically challenging for him as he had to gain weight and grow a moustache for his second innings in the film. He told Filmfare that people would mistake him for a security guard. But all his effort paid off when Kamal Haasan complimented him. “He loved my performance, so did his fans,” Kapoor told Mumbai Mirror.

Amrish Puri, like always, showcases the brilliance of his craft in Virasat. But my only complaint with the makers would be not giving him those powerful dialogues with which Puri has always enthralled his audience.

Tabu was perfect as a meek, dutiful Gehna, who is eventually married to Shakti. The charming innocence in her eyes makes you sympathise with her. One scene where she stood out for me was when she offers to entertain Anita, who is upset after knowing about Shakti’s marriage to her, by singing a song. She begins by beatboxing, which she’s done herself, and sings “Payalay chunmun chunmun”. Tabu, in an interview with Filmfare, had revealed that she got the scene right in the first shot itself. She said, “I didn’t even know it was called beatboxing then, I just did what Priyan (Priyadarshan) wanted. There were no rehearsals, I was praying we’d get done with it quickly because it was already 2 am and this was the last scene of the day. I was relieved when we canned it in one shot.”

The film’s title Virasat, which translates into heritage, aptly sums up the whole movie. Today, commercial cinema has come a long way and has been modernised. It is very different from the earlier times when filmmakers relied heavily on familiar, tried and tested tropes. For those discovering Virasat today, after 25 years of its release, the film may look outdated and dismissed as melodramatic. But I’d still argue in favour of revisiting it, given the cinematic experience it holds.